I was looking through my photo archives and realised that there are a number of photos that I haven’t posted. 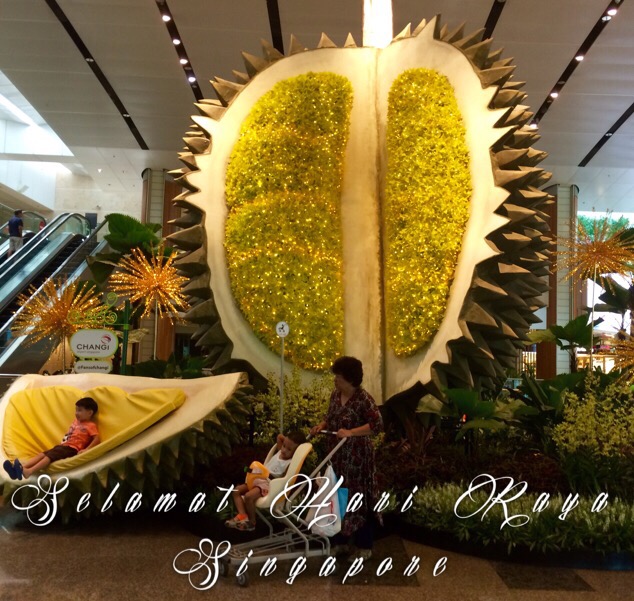 It was during Hari Raya (Muslim new year) that Changi Airport Terminal One decided to put up this rather bizarre display to wish all Muslims a good celebration. There is a saying that when the durian is in season, sarongs come off. Sounds a bit obscene? Well, perhaps it was how it was translated to me. The saying originates from how Malays in Malaysia used to trade their cloths for good durian, even the yarns they wore were up for barter. That’s how wonderful and addictive durians are.

Anyway, the durian on display was rather large and the little sofa was a nice touch. Lots of people photographed themselves on it for their social media page.

I received a last minute invitation to a Thanksgiving dinner and was wondering what to bring. I had some green agar jellies that I’d made but thought that something more substantial was in order. My go to gift is always good fruit. Expensive but delicious and worth it if the host is a fruity foodie (which my host was).

Back to Fu Wing. There really wasn’t much in the way of anything special, the peaches were soft and only 3 were left. I wanted the unmolested fruit. So out of the fridge came the crisp persimmons and Korean pears.

Wait a minute. Where were the durians I saw yesterday? The polystyrene box was there but nothing on top but clear airspace.

Translation: ai ya, durians sold out.

I asked who bought it, whether one person bought all or each bought one?

Curious me: how much was it per box?

Curious me: so it was 168 per pound you sold them?

Wow. In Hong Kong money is no object (relative to property prices, everything pales) and dropping a few thousand for durian is no issue.

Curious me: for that price they can go to Malaysia to eat durian!

See Tao po: yes but the buyer said that when he went last time he couldn’t get any as all the Musang Kings had been exported!

Competition for the best fresh durians is already happening?!

Well globalisation and international logistics chains are skewing markets everywhere. Good and bad I suppose, depending on which side you’re on.

Last night, after an invigorating run through the empty street market, we went by our usual fruit store, Fu Wing.

Lo and behold… Not One but Four Musang Kings sitting in their full glory on the polystyrene box. They looked a good size and I asked see tao po (lady boss) how much they cost.

I couldn’t bring myself to justify paying that much… Not with Christmas round the corner and our soon to eat durian feast in Singapore.

The winter season harvest has started. Right on Thanksgiving. So now you know.

When browsing I came across a food blogger who has compiled a list of durian dessert shops, nice pictures though not all seem worth trying.

Have a look at her site here.

I am eagerly awaiting the Cong Sao dessert shop to open in my neighbourhood (Wan Chai). Perhaps the queue won’t be as bad as Causeway Bay… We’ll see.

On another note, the specialty durian dessert shop in Causeway Bay in Haven street shut down before I could get round to trying it. Well, it’s not easy to please all the customers when you’re just selling one thing… Too bad.

Well I completely missed this piece of news but figure it’s not too late to put this up.

A shout out to my brother-in-law in London. Musang king now available in your city!!

Find it at Loon Fung. Tell me what it’s like.

I was walking towards home today when I decided to check out a frozen meat shop. Ah Wong Fine Food Company. Despite its name, it isn’t a gourmet shop as much as a gourmet stall… An impressive number of freezers packed into a very tight corner. The last time I walked by, there were some impressive listings of imported meat and seafood, at cheaper prices then what you can get at the supermarket.

These shops paste sheets of A4 paper- often hand written- of what the item is and the price by weight.

I bought some imported beef slices and as I was leaving, spotted this: 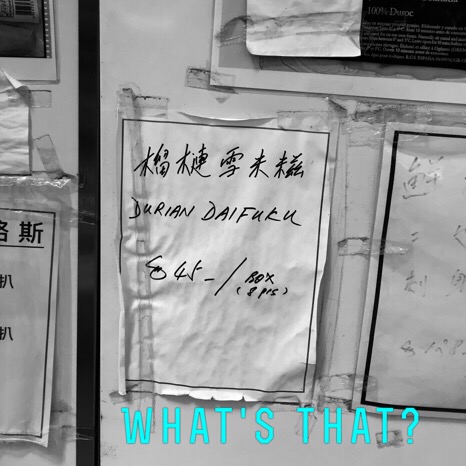 What on earth was that? I wondered. Since I was already a client, I was less shy about asking.

Boss, I said in my crappy Cantonese, what is durian daifuku?

The boss replied in Cantonese, it’s something you eat and drink.

I persisted: Is it frozen?
Yes he said.

Well can I see it? I want to know what it is. Where is it from?
It’s from Malaysia he replied.

Then scrabbling around a freezer in front of me, yanked out this box. 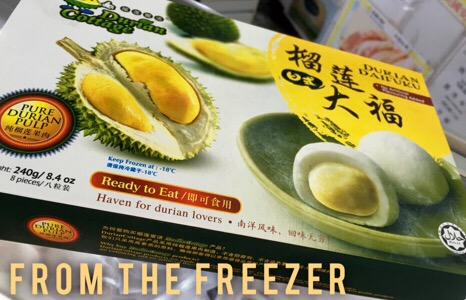 I thanked him and told him to put it back. The meat I had bought would thaw nicely on the way home in time for lunch. The durian mochis will be for another time.

It’s just hilarious that they made it sound Japanese… In chinese characters it says Da Fu or Dai Fu in Cantonese (meaning big wealth) but they added a ku on the end of it.

45 Hkd per box isn’t much, less than 7USD. For 8pcs, that works out to be less than 1USD per piece (or bite). It doesn’t state what type of durian it’s made of. I’ve paid more for an ice cream stick so maybe this might be worth a go.

Late post. I had this information in early September, now putting it down for posterity.

The fruit stall that I’ve purchased Malaysian durian from on several occasions had a fridge put out during mooncake season this year.

A special fridge for those precious pastries

Each dark mysterious box contained 4 Frozen mooncakes. I had a look inside the fridge, curious as to the size of each mooncake, but the tins were individually wrapped in shrink wrap.., to prevent tampering I suppose. A freezer tells me that it’s snowskin.

At 380HKD per box, that would be equivalent to the cost of one fruit. Well, roughly the same price as what I would have to pay in Singapore… Maybe I’ll try it next year. 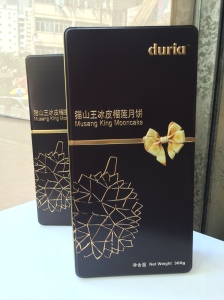 We planned to have dessert at Cao Song last Sunday. Until we saw the queue. Forget it, I said to our little group of six, we weren’t going to hang around for an hour on a pavement barely shoulder width wide. Not with three kids in tow.

The next dessert shop in the street was Dessert Playground. It was deserted, not a single customer… definitely a bad sign. Well, we needed somewhere to sit so we took the plunge. A rather confusing menu was presented.

Oddly enough, this fluorescent lit shop with bright green awnings had a list of chinese desserts but seemed to specialise in durian derived desserts. There was a lot to choose from.

Everyone else went for the chinese desserts or the western cakes… I ordered the Mau Sang Wang ice stick for HKD 68 (D24 version costs HKD 38).

The ice cream was edible, suitably creamy without any artificial under or overtones. It was well made without a high water content so you don’t get that brittle ice texture where it all comes apart with each bite. Downside was that it was smaller than I expected and the presentation on an ugly plastic plate was disappointing.

All the other desserts ordered, chocolate cake, coconut pho, the chinese soups were just awful and quite inedible. They tasted straight out of a packet.

Verdict: great for groups needing a place for a rest as it’s almost always empty (I think I’ll remember it as desert playground). Get a durian ice cream or a drink, all other desserts are poor quality.

I’ve been in Hong Kong for a while now and apologise for the neglect and shortage of durian information and experiences.

Well, I have been buying and eating but just not reporting it. The thing is, Durian in Hong Kong is pretty expensive (like 2-3x more, since they are flown in direct from Malaysia) and the quantities that we consume now are woefully small compared to our feasts in Malaysia. I have also taken my chances with Thai durian and it is a FAIL. Do not go down this route my dear durian lovers, even in times of extreme durian depravation. I opened the packet and literally after one bite (the whiff was fine) threw the entire packet away. The Thais really shouldn’t waste good plantation space on bad fruit products. I think they should throw in the towel now, do a deal with Penang and expand the cultivars from the slopes of Ferringhi.

Here’s another reason why you shouldn’t buy Thai durians in Hong Kong even if they are cheap. According to this article, durians from Thailand were found to be artificially ripened and coloured with Tumeric. Hmm… no wonder they often look a weird tinge of yellow…

Test results showed that the husks of 10 samples contain curcumin, a colouring matter, and three samples were detected to contain excessive residues of ethephon.
“Turmeric (curcumin) is a rhizomatour herbaceous perennial plant. According to the Colouring Matter in Food Regulations (Cap 132H), although colouring matter can be added to processed food, it should not be added to meat, game, poultry, fish, fruit or vegetable in a raw and unprocessed state. Upon conviction, offenders shall be liable to a fine of $50,000 and imprisonment for six months,” the spokesman said.