Durian Pengat as the draw

I read in the local daily newspaper about a cafe that offers a durian dessert. OWL cafe in Republic Plaza is newly opened and if you are in the city, you might like to check it out. Here’s a link to a food blogger’s review of the dishes served.

Durian pengat is a sweetened durian pulp, just like having blended durian except made richer by the addition of coconut milk to unify the textures. It makes not so good durian edible in a sweet soup. Here’s a recipe from a lady who likes the dessert. However there are many ways to make this and I have not tried this so cannot vouch for it.

On a recent trip to KL, I invited AC over for dinner. It had rained in the afternoon and we wanted to stay home to avoid the traffic at rush hour. She said that she would love to come over for dinner and exclaimed “I haven’t eaten durian since the last time you were here! I will go buy some as dessert.”

I wasn’t sure if she would, as she would have had to brave the traffic all the way to Jalan Imbi and back. Well, as sure as my salmon was in the oven and baking for dinner, AC turned up with the durian dessert. Initially we left the trademark rose red plastic bag on the table and didn’t want to touch it until after we had our dinner (you will soon see why this plan worked).

Right after we ate our dinner, I was pretty excited to get started on the dessert.

My mum was a bit surprised that I had space for durians after the big meal, but as I have maintained for years, dessert compartments do not overlap with main dinner compartments.

So here’s why I could have my durians post dinner instead of having it as an appetizer. It was air sealed and there was no smell! So one of my main senses was deprived and hence… less temptation. AC told me that the Jalan Imbi durian uncle was rather proud of his new packaging, specifically pointing it out to her when she bought it. He told her that this way, no smell gets into the car. I suspect that this also serves the hordes of chinese tourists who want to bring some back to their hotel room or their home country via their luggage. They usually descend on his stall by coach loads and like a swarm of locusts, consume all the durian in sight.

Mum got a pair of scissors and exposed the wonderful durian fragrance which permeated the entire room.

And here is the first packet. Looking pretty good and tasting rich, smooth and creamy like a brut champagne.

The next box was equally delicious but had a different taste (one box contains fruit from one durian). It was a little softer, more pliant and a little watery. It had stronger bitter undertones and less of the sweetness. The thing about durian is that you can’t ever find fruits to compare which have the same texture but different tastes or the same taste but different textures. That is one of the wonderful surprises that durian has to offer. This is true even of fruit from the same tree.

Here is the final evidence. 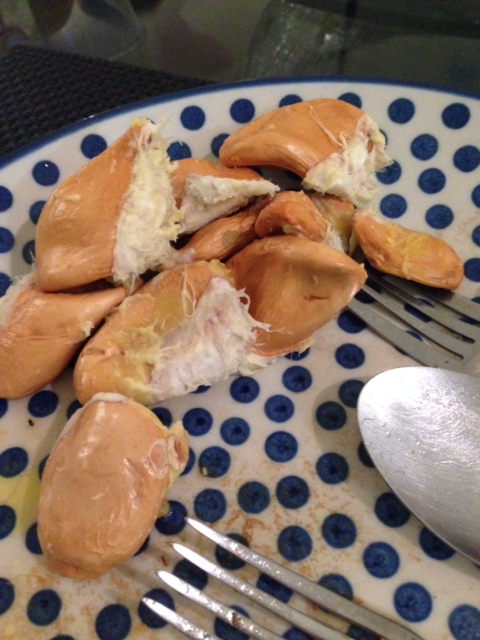 Seeds of the Mao Shan Wang

The seeds are classically mis-shapened and small, most of Mao Shan Wang is the satisfying taste of sunshine.

Stinky Spikes now has a new blog look. Less side bars and more space for the main blog topic.

Let me know if there’s anything else you’d like to see.

Here’s a snapshot of the old blog just for posterity.

My friend O and I went to check out the Gardens by the Bay’s latest attraction, the Children’s Garden. By the time we huffed and puffed our way there from the car park, the sun had evaporated about 5% of our body’s liquid mass. Desperate for a drink of water, we entered the nice cool air-conditioned shop that was beside the Toddler play area. It was my first time in there, and the menu consisted of the usual fast (and somewhat junky) type food that most commercial vendors believe children should be eating. While I was browsing the counter, saw a little acrylic stand selling bars of chocolate. 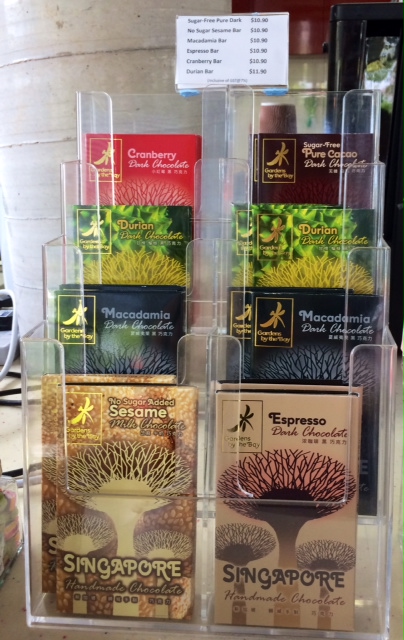 Gardens By The Bay Branded Chocolate

What possessed the GBTB to brand their own chocolate slabs for sale? I guess it could be a souvenir… they should  perhaps advertise a unique selling point that it doesn’t melt in the Singapore heat. The flavors are quite different than what you would find in a normal display in the supermarket or what Lindt would consider their bestsellers. The Durian one caught my attention, and it was all with Dark Chocolate. I didn’t get round to trying this, maybe it would be better if they sold it in one of the cold domes rather than the stall which lets you out back into the hot sun when you step out of the glass doors. I was imagining stepping out into the Toddler play area with chocolate on my hands and stains on my shirt. Nooooo….

Anyone tried this yet? Please let me know if you have. I’m a fan of the actual durian more than the processed derivatives.

At the Marketplace in Tanglin Mall, the luscious D-D-D-Durian was spotted for sale:

Durian for sale at the Markerplace

The color looked good but there was absolutely no smell despite the basic looking packaging. Price wise, I guess it’s more or less the same as what you can find in most other supermarkets like Paragon for a Mao Shan Wang (unless they have a one for one offer). It looks like each box contains roughly half a durian fruit, it doesn’t look like they bothered weighing it, more like what they could pack into each box.

After a taiwan porridge dinner at the Goodwood Hotel (they are famous for this), I needed something sweet to get over the savouriness of the meal.

I’ve wanted to try the durian ice cream for some time, the hotel cafe promotes this heavily as their star item.

So here’s the single scoop. 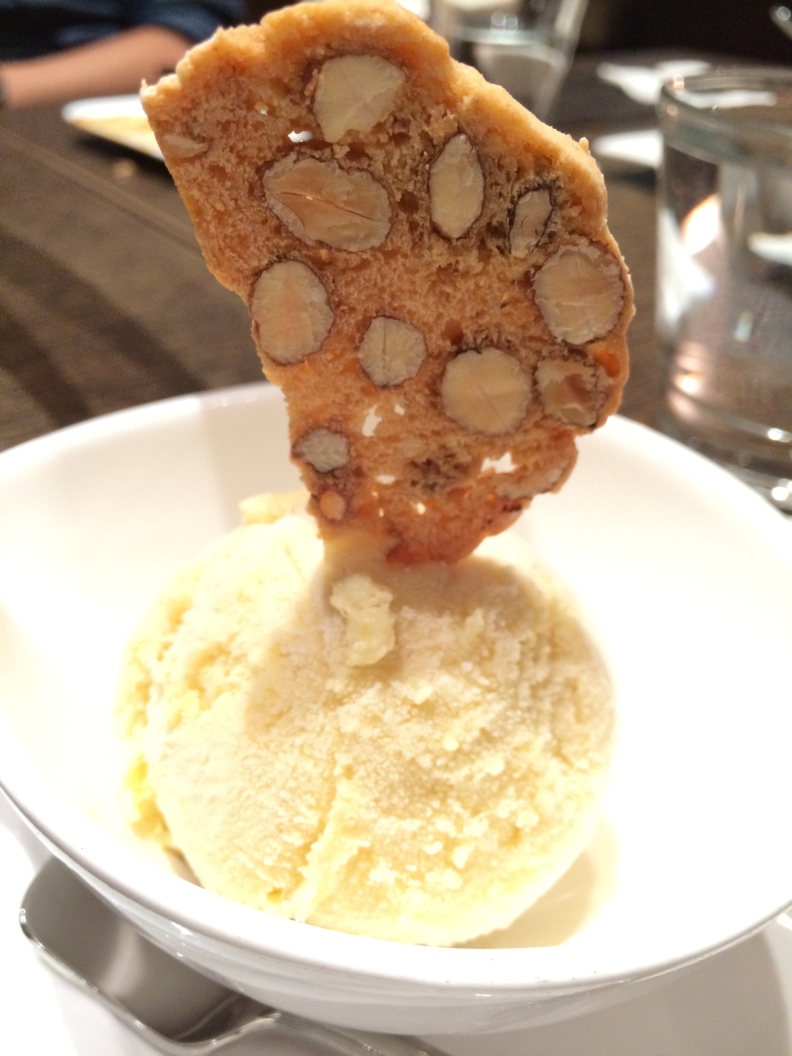 Color is mild and so was the aroma… but that’s probably natural as it is frozen ice cream.

It was pretty good, I give it a 4/5. It was smooth and had some meat to it but I prefer durian ice cream with chunks of durian in it so that it’s textured and chewy. The biscotti was a bit of a distraction but it did make the serving look a little larger and more posh. It is available all year round so it will satisfy any cravings you have, even in the middle of the night.