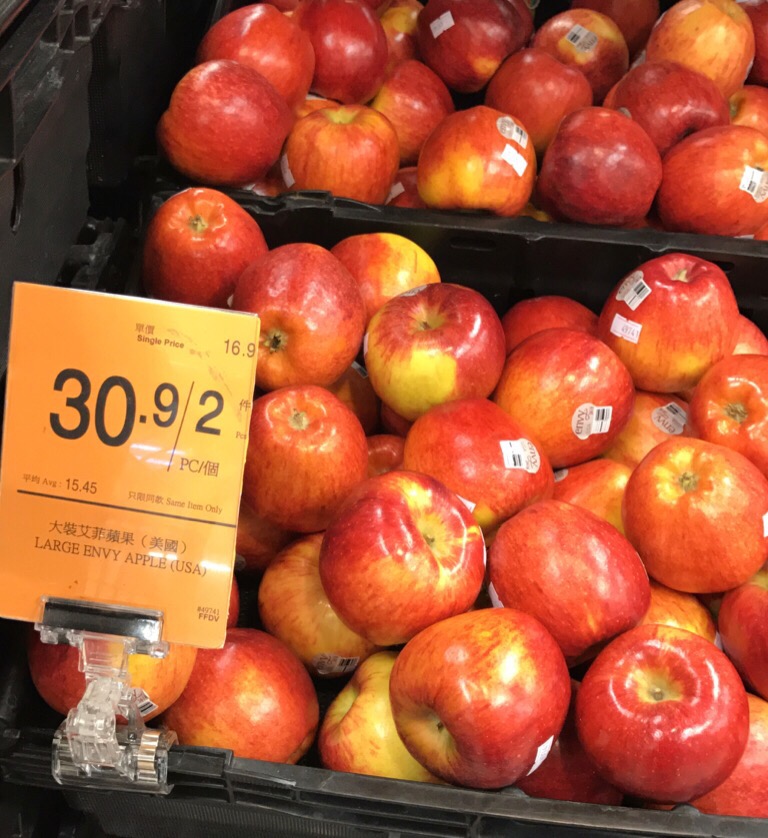 These are my favourite apples.. US Envy

If you’re in the throes of motherhood and playgroups, you might recognise this song. (If not, have a listen and I think your toddler would really enjoy singing along).

I was thinking about how one could construct an easy singalong featuring the durian. Can anyone suggest a rhyming word?
I like to eat eat eat durian and bananas, 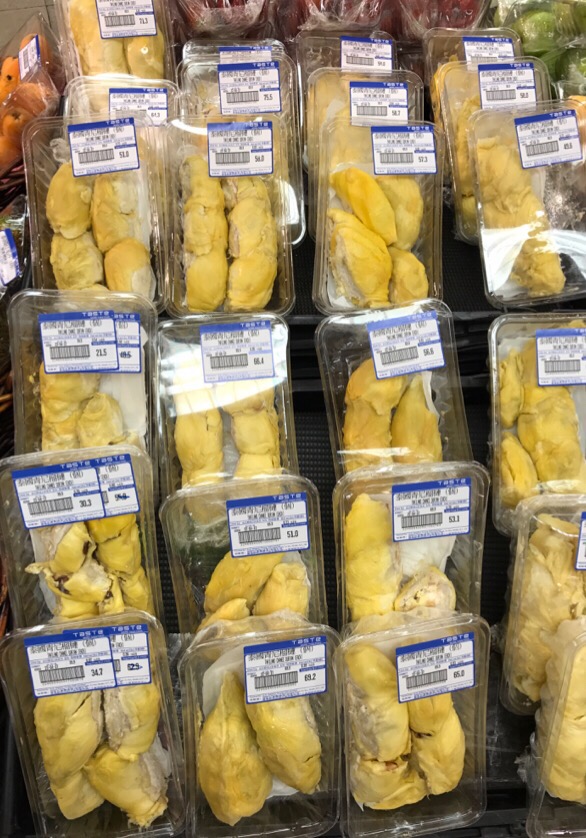 Only Thai Chanee available at the moment

I like to eat eat eat durian and mangosteen…

How creative can one get with durian? Given the addictive nature and general lack of fruits for most of the year, I guess some restaurant chefs must think there’s a crowd that’s willing to pay for eating it in a variety of ways.

My question to the chefs is this. When cooking up a “durian-inspired” fusion dish, do you seek to enhance or dampen the durian flavour?

I suspect that any “cooking process” actually destroys the delicate aromas of the durian. But if the fruit isn’t so good then maybe it’s not a bad thing..

I have two friends here in Hong Kong who are self confessed durian addicts. As far as addictions go, being addicted to durian is probably one of the toughest. Why?

1) it’s seasonal, unless you accept Thai versions of durian.

2) everyone expects you to share. So no squirrelling it away to delve into piece by piece in privacy.

3) aroma. Even if you did eat it secretly, you can’t hide the scent in your breath and your  subsequent burp.

Anyway, DC and AY love durian. They’ve told me so many times and keep a small stash of the stuff individually packed in heat sealed airtight bags in their freezer. But as the durian connoisseur knows, the flavours and texture of frozen durian seldom approach that of the naturally ripe, freshly chiselled open fruit at room temperature. It’s also the suspense of visualising the flesh as the thorny husk is prised apart. It’s just not the same appreciation when a clear plastic box is plonked down in front of you and you can see every seed you will eat all at once. The sound of crackling from the frozen plastic box also fails to stimulate.

Alright. Enough waxing and whining. Let’s get down to business.

DC and AY invited us over to their home for dinner. Naturally, we bring dessert. I just relished the opportunity to do the test I always wanted. Comparing a chain store purchased Musang King to one bought from a specialty fruit vendor. Are the durians at Park n Shop good enough? Do they preserve the freshness well on the shelf for several days? Is the price difference justifiable? Let’s find out.

I skipped over to the fruit vendor Fu Wing.

I paid it and asked him to put some cling film around it for me. He protested. “It will spoil”, “the heat will destroy the flesh”, “the water content will leak out of it”, “it will be too stuffy”. I told him I’d be back in half an hour for it and it didn’t matter as I was only taking it for a 25 minute journey. I just didn’t want it to stink out our Uber car.

After that I did a quick march to the supermarket. There were several mao san wang durians ALL wrapped up in cling film sitting in a plastic crate. I picked each one up carefully, observing the state of the stem, the colour of the husk, whether there was any detectable scent and if they felt equal in weight.

Weight wise, they all felt quite similar. This sorting had taken place upon supplier provision. There were colour variations, some husks more rust coloured, some very green. That generally indicates whether the fruit was exposed to the sun or not. The stems were all about two inches long and seemed relatively healthy, except for one which had split longitudinally, probably during handling. I couldn’t detect any scent, all the durian husks were intact and kept so by the tight cling film wrap.

I chose a green one with a good looking stem and felt firm within when I gave it a shake. HKD 350. That’s a whole 20% cheaper at the supermarket.

I popped it in a plastic bag and put it in my stroller bag. No sense letting everyone know I had bought a durian and I didn’t want to injure myself carrying it in my hands (yes, seriously). I also didn’t want Fu Wing to know I’d bought a durian from the supermarket… (I just wanted to ensure that they would not select differently).

Thus armed with two thorny fruits, we made our way over to DC & AY’s home.

“Happy Birthday!” I exclaimed when she opened the door.

“It’s not my birthday!” She replied.

I know that. But everyone needs an occasion for durian… more the reason for two (especially at this price).

After a bak kut teh dinner, AY placed both fruits on the table and deftly split them open. 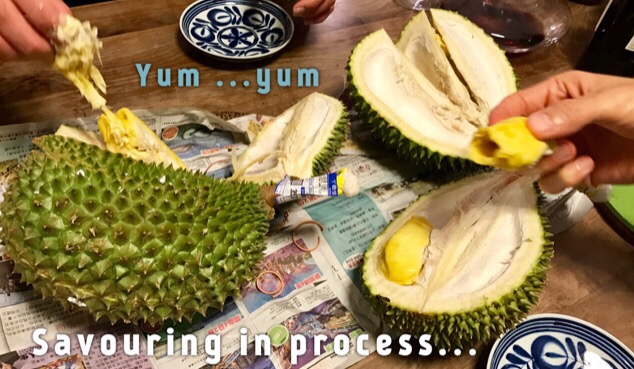 The aromas were immediately apparent and wafted throughout the house. I tried getting everyone present to do a blind taste test but no one agreed. Everyone said that visuals are part of the experience. Ok ok, point taken.

So what was the consensus?
Durian from Taste: 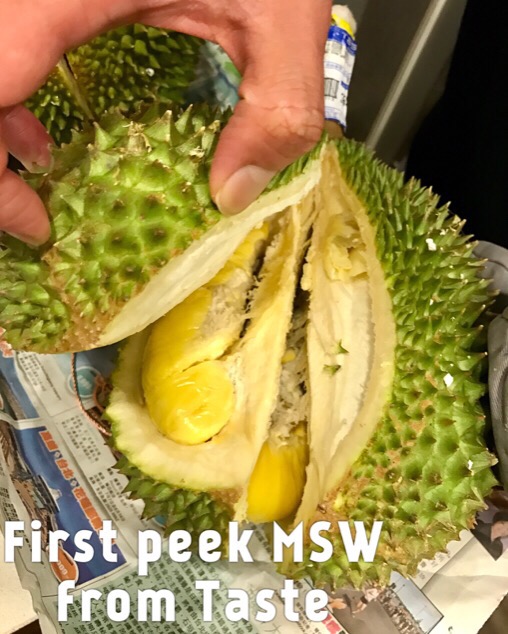 Bitter, sweet, smooth, creamy, just enough elasticity in the bite. Fragrance was rich and full, the seeds small and flat. 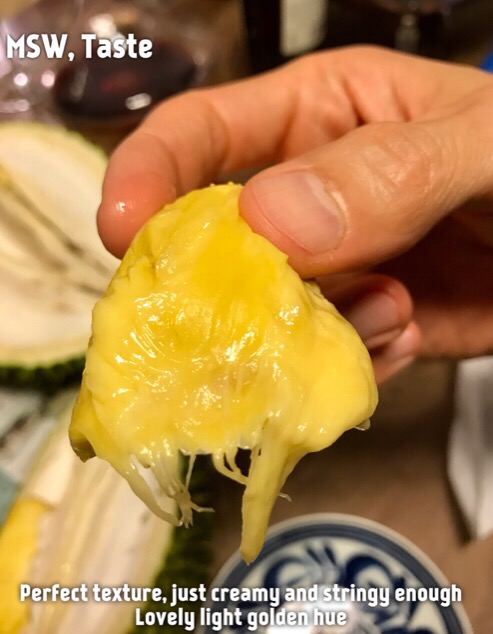 Sweet, smooth but a little too firm. Not ripe enough to present as really creamy. Fragrance was present but not tantalising, as expected from a fruit with more maturation to go. 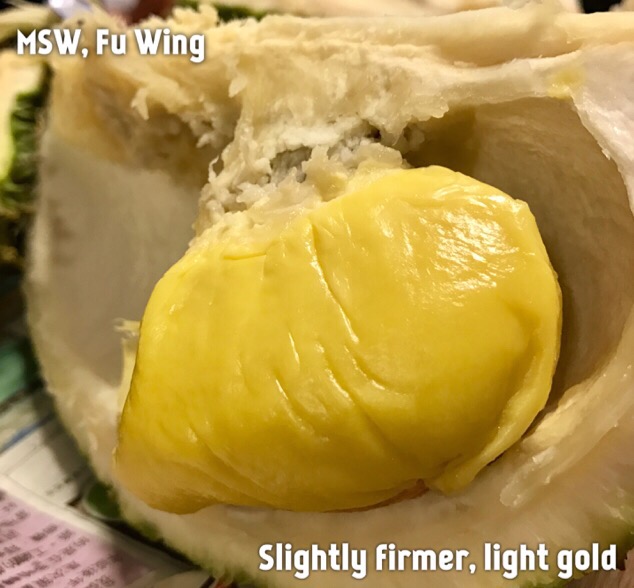 We declare the Musang King Mao San Wang from Taste best value for money and the overall Winner!