Well, I do like chocolate. Yes, I do like durian. I suppose it wouldn’t have been too much of a stretch to combine two of your favorite desserts into one… is it?

Imagine: strawberry chendol…., guava barley…., pomelo cheng tng…, rambutan and cheese? There is no end to strange and wonderful possible combinations- as weird as they may sound- so maybe durian chocolate isn’t so strange after all. Durian is already used in a whole host of other dessert varieties, for example durian pancake (many featured on this blog), durian ice-cream (I just had it on Monday at Scoop Singapore, devilly delicious) and durian sweets and fluffy cake.

I haven’t seen durian jam, durian coffee, durian tea or durian massge oil yet though… maybe we have to accept that some things are just not commercially marketable.

If you’d like to try the durian chocolate (desperate for a fun gift or just desperate for that aroma de durian), you can buy this at the airport. I spotted this at the LCC terminal, international departure zone, but they probably have it at the main KLIA terminal too (I’ll have to keep you posted on that). 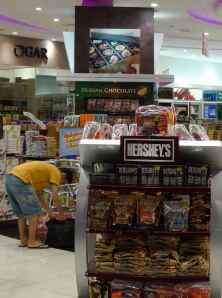 This is the large chocolate and alcohol shop at the base of the escalator in the international departure waiting area.

And here’s a close up… apparently comes with a free gift too. I didn’t see too many people walking out with a box, so its a bit hard to gauge whether this product has been a hit.

When I was walking around FX Sudirman with an hour to pass, I walked up the mall via the escalators. In this mall, they permit vendors to have tables throughout the mall to display their wares, which were often creative knick knacks, drawings or items of clothing and accessories.

I came across this little booth that caught my attention.

Gus Durian Books and T-Shirts for sale in FX

This is a play on the former Indoneisan PM’s name.

I can’t read what it says in bahasa (local language) but it must be pretty stinky, spikey or funny.

SW thinks the design is kind of cute.

They were selling books and t-shirts with the logo on it. Seems like a fun way to appeal to a younger audience, but then again, not everyone likes durian…

It was a balmy weekend in Jakarta, the sun was out and the streets were dusty. We spend an hour in a taxi to take us to the hotel which was barely 15 minutes walk from where we were, but the air conditioning in the taxi was a welcome escape from the noise and pollution.

We barely had 20 minutes to shower and change before our friend AR came to pick us up from our hotel, the FX Harris Suites Sudirman (you can read more about it on Tripadvisor if you are planning to head over to Jakarta). Once we got back into the car, AR asked us what we’d like to do. Museums? Been there, done that. Art galleries? Nah, it might be too late anyway as it was almost 5pm. He said, “Well, its either a mall or my place”.

SW had a flash of brilliance and suggested we go buy some durian and eat it at AR’s house. AR thought it was a fantastic idea (I suspect he doesn’t get durian very often) and immediately thought of 2 shops where we could procure this stinky fruit. SW struck off the first place without much hesitation, it was too far away and in the Jakarta evening traffic would have been a voyage of at least 2 hours. “Let’s go to the second place, hey isn’t it sort of on the way to your house?”

Destination agreed and driver instructed, we settled in for the half an hour ride to the fruit shop.

We pulled in at the “All Fresh” Fruit Store on Jalan Panglima (Kebayoran Baru branch) which AR and SW said was renown for its variety of fresh fruit. If any place had durian, this was it. My expectations were running so high. Here was the first advertisement I saw:

Advertising their durian goods in Jakarta

So I thought… “OKay.. hmm, durian pancakes make sense because hey there has to be something that can be made so that the leftover durians don’t go to waste.”

But hang on. There was a “NEW” sign on it, so either its a recent thing or maybe the sign has been up there for ages.

Anyway, no better way to know then to go on in and check out the shop.

AR was all excited and led the way in.

“Here are the durians!” he exclaimed pointing excitedly to the durian corner.

Durian Stall in the All Fresh Supermarket

Well… I hate to say it, but I really wasn’t impressed. A durian stall with barely any durians on it? I could count them, there were probably no more than ten of them and they looked miserable. They were all definitely Thai imports, as it was the Monthong variety. There wasn’t even a fruit seller standing there to sell any of them to us. Hmm.

AR was undeterred. “How about these here S-one, they look pretty good. I’m sure some of these are ripe”

In the usual fashion, I poked and prodded them (carefully and gently, so as not to leave fingerprints in the flesh of the fruit). Well, they certainly looked good, but when I brushed my fingers over them, they felt solid and unyielding. Packet after packet I brushed, hoping and waiting to chance upon the right and exact one which would make it home with us.

“None of these are good AR” I said firmly,”all of them are unripe and too hard. It’s because they are Monthong and Thais like to eat them before they truly ripen, but that’s not how we like it.”

AR was yet again reluctant to give up. “How about this one?” he said, lifting up a packet  (see photo), “It smells pretty good and ripe too”.

Nope, no real pungent aromas there. I just caught a faint aroma, but not enough to tantalize the taste buds. SW had wisely stayed out of the selection process and stood by just asking if all the packets were the same and whether we should buy a whole durian off the shelf if that was preferable.

My reply was swift and firm. “None of these durians are good and if we were to buy them, we might be disappointed and be frustrated with ourselves and the waste of money”.

“Oh” SW replied,”Well we can’t have that then. Maybe let’s buy some other fruits in that case.” Very practical.

So I sent AR and SW off to select a variety of fruit, mangoes, mangosteen, papaya, duku etc.

Meanwhile, I continued to browse the fruit selection near the durian, when I came across the durian pancake they advertised at the main entrance.

So here is the durian pancake.

How weird is that? The sign at the top said “PANCAKE, DURIAN MONTONG” and all I could see initially were packets of cut papaya and pineapple.

Well, look a little further down. Do you see it now?

If you look on the 3rd shelf (bottom of photo), you’ll see these 2 small packets… yes! They were the durian pancakes.. or that was all that was left of them I suppose. 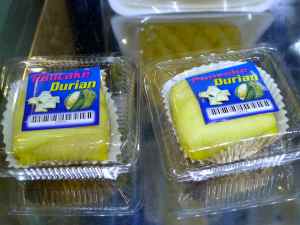 The durian pancakes for takeaway

The pancakes were made in a square, like the way a lump of tofu is made. The skin of it looked convincing enough but I couldn’t tell if it was soft and tender or chewy and starchy. I also had no idea whether it was freshly made or whether these were the leftovers from a previous bake.

In the end, I wasn’t going to find out, the decision had already been made. It was quality over quantity and we had to save the durian feast for another time.