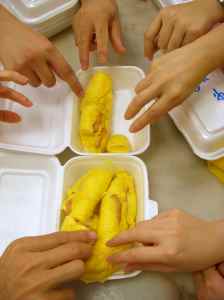 Fight for your Durian!

About 3 weeks ago, my colleagues from Hong Kong were in town for some training and in the usual and customary hospitality of a Malaysian, we had to take them to sample Bak Kut Teh and Durians. These are the two things you definitely will have trouble locating quality samples of in Hong Kong. Hong Kong, being primarily Cantonese (this is a dialect of Chinese) don’t have Bak Kut Teh, which is a dish by Hokkiens and Teo Chew dialects. Durian wise, Hong Kong’s proximity to Thailand means that most of the fruit sold in markets there are of the one Thai species. Consistent, but lacking in complexity in species.

OK, speaking of Hokkien things, Bak Kut Teh is Hokkien and Penang is predominantly Hokkien in population base. So there are two Hokkien related foods in this entry then but I won’t be delving into Bak Kut Teh as we have to stay focused on our main topic- Durians!

As there were 7 of us, its just one of those things where everyone tries to be polite and to say “You take it first…” “No, no, you take one first”. So in order to get things going, I asked everyone to put their hands in and grab a piece for this shot. Once we get going, being shy is no longer an issue.

We had 4 varieties that night, the D101, the XO, the Red Prawn and Mau Sang Wang. The durian which had exceptional flavor and was declared the overall winner of the evening was the…. Red Prawn!

The Red Prawn or “Ang Hae” in Hokkien, is a hybrid graft from Penang and so named for its characteristically orangey flesh (which I suppose could be likened to the orange pigment seen in boiled prawns). This particular durian that we had was the most spectacular of the lot that day. The seeds were tiny and the flesh had the consistency and coloration of peanut butter. Taste-wise it was bitter sweet with a slightly alcoholic, fermented kick at the end.

One of the problems with durian is that the smell of it only heightens the activity of your tastebuds to prepare your salivary glands with what they are going to have to deal with next. This Red prawn had us salivating and as there was only the precious one durian (packed into 2 boxes) all 7 of us polished it off without so much as a “please please you first” or a “would you like another”.

If you haven’t tried Ang Hae, I highly recommend it but make sure that it is very ripe for eating, some people like it firm but that seems a little raw to me, its best when the flesh needs to be teased and stretched to breaking point, with the texture of  well-kneaded dough and fresh blu-tak. The flesh should be dripping into your fingers so that you have the pleasure of licking your fingers when you’re done.

2 thoughts on “The Red Prawn Durian a.k.a Ang Hae”