“Have you been to Apita before? It’s where most Japanese people go to do their shopping.”

As I hadn’t, my neighbour EB suggested that we take a trip to Apita Supermarket in Tai Koo Shing.

I am full of praise for this supermarket located in the basement. Upon descending by escalator, the cavernous brightly lit space opens up on two sides. Turn left. Pick up a basket, pop it on the trolley. Wheel past bakery shop Panash and try not to stop because you’ll be overwhelmed to purchase a bread bun. Enter fresh foods area.

Wide open aisles, neatly packed fresh produce greet you. All labelled in Chinese and English. I’d just finished inspecting the vegetables and saw the foreign fruit section. Sitting on its own little display crate were the prize.

The whole durians looked small-ish but good. The stems were on and I couldn’t detect any aromas. Price wise, it’s more expensive on a per kg/lb basis.

The packaged durian was double sealed. I was very impressed that I couldn’t detect a whiff of durian at all. The staff must have taken great care to ensure that no durian made contact with the exterior (not even transfer through gloves).

Then I saw this fantastic packaging display. Seriously, what artistic staff. To split the durian open perfectly in half, exposing the fleshy pellicles and balancing the other fruits on top without looking like it’s been mushed up? That is artistry.

And I couldn’t smell a thing. Just fantastic. Not even City Super does it like that.

This gets my vote for most eco-friendly packaging as there’s no excessive plastic surrounding it, just cling film. But you’ll need to carry it home very carefully so that you don’t end up with just durian pulp on top. 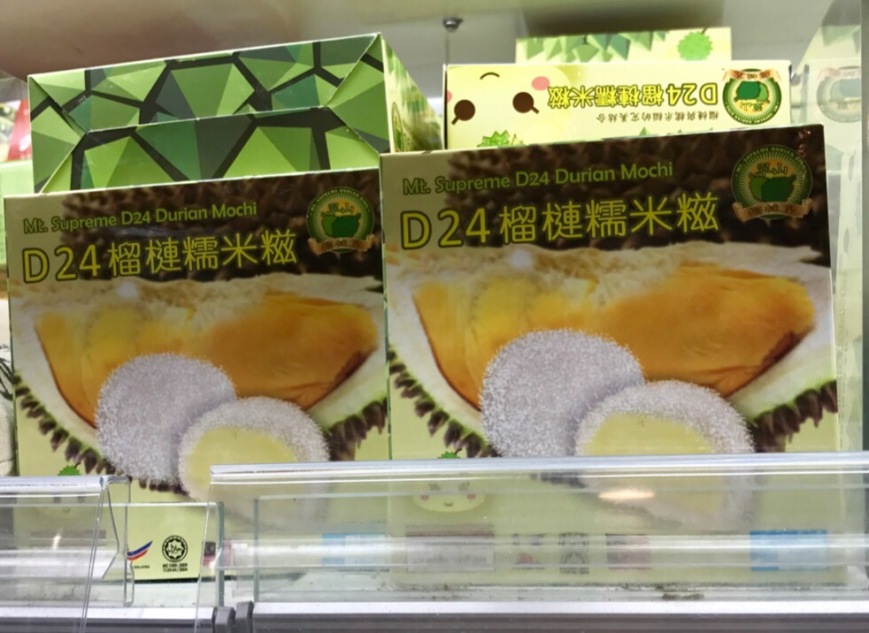 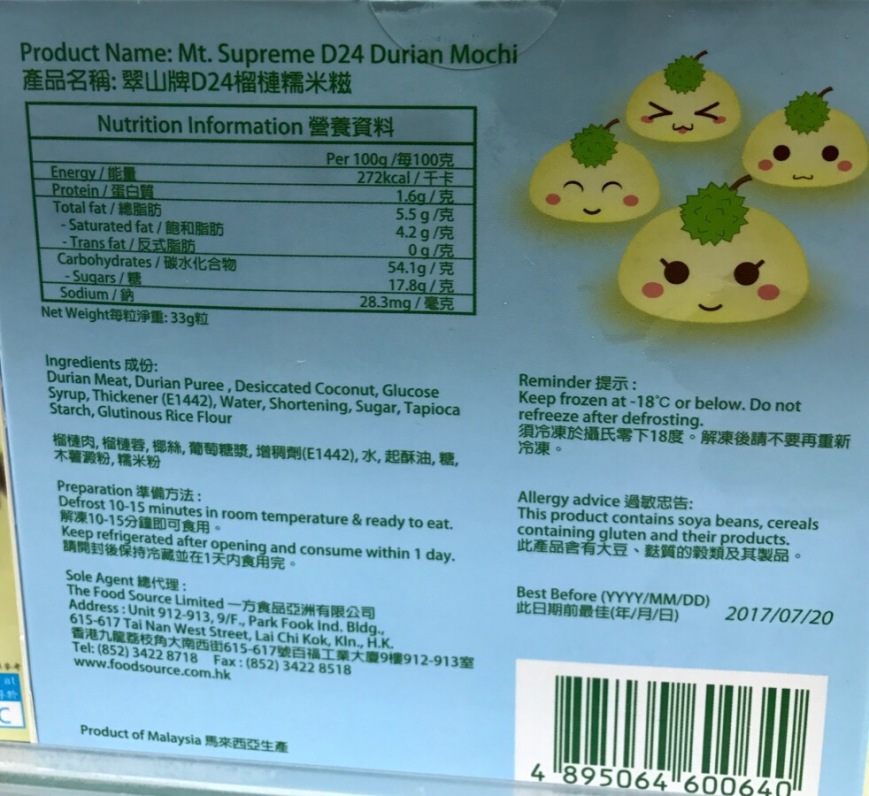 What’s in a durian mochi?

They also had frozen durian mochis available but these are made from D24 so it’s a very different flavour.

I didn’t buy any but I did have durians on the weekend. Read about my durian challenge in the next post.

I’ve been eyeing the durian in styrofoam boxes sitting out at Fu Wing for the last few weeks. At HKD 109 per pound, I’m waiting and looking to make up an excuse and occasion to have one.

Well, the perfect reason came up about two weeks ago. We were invited out to Tuen Mun for a toddler’s birthday party and I thought we might as well maximise our trip by visiting my sister’s in laws who live by the Gold Coast (HK, not Aus). They kindly invited us to dine at home, and as he is a chef, would serve up the most delicious home made dishes. We knew we were in for a treat and gladly accepted.

We ran through our list of “what to bring to friend’s house for dinner” and found it somewhat limited and unappealing. I mean, we’re eating at a professional Singaporean chef’s home… bringing anything made by anyone else just wouldn’t cut it. It might even be construed as an insult.

“How about durian…” SW suggested.

I stopped by Fu Wing to ask if the durian was any good.

“Very very delicious” replied the owner in Cantonese, “the flesh is fragrant and soft“.

“I like bitter, are you able to choose a bitter one for me?”

“Can, can, the flavour is bittersweet“.

On the day, I rang and confirmed my order. A medium-sized durian, bittersweet, wrapped as a whole fruit with husk.

We paid HKD 450 for it and had him seal it up with newspaper and cling film as best he could (despite his protests that the durian would start to go bad due to humidity). It was only going to be a few hours, it’s been relatively cool and we didn’t want to stink up the toddler party or our taxi. Unfortunately here they haven’t caught on to the vacuum sealing packaging systems yet.

So here are the details. 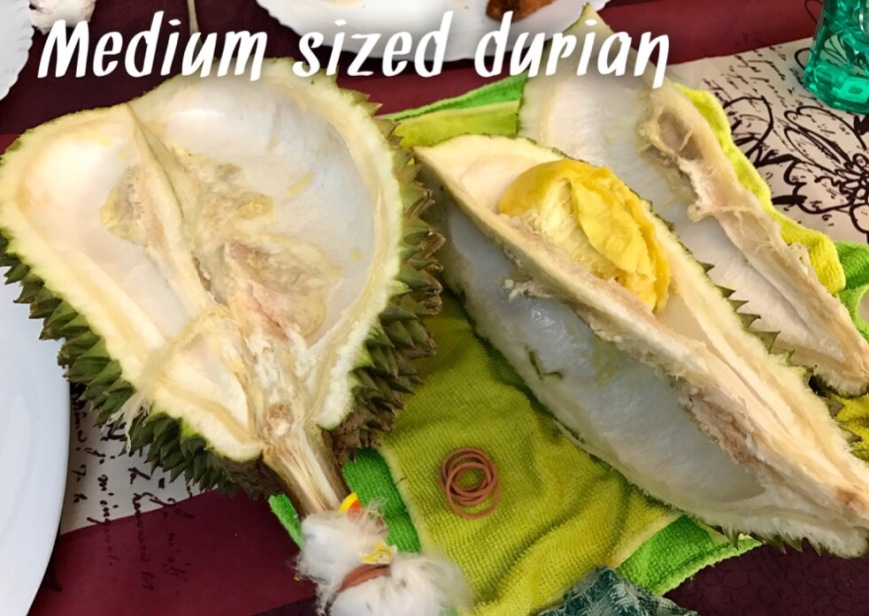 The Mao Shan Wang durian was fresh, the flesh was delicate yet firm, the aromas wafting out once we opened it. The center portions were dry and the seeds were small, flat and pebble-like.

I would say that the only disappointment was that the flavour was distinctly sweet, we didn’t detect a hint of bitter at all.

Overall enjoyable for an off season but we wished that the flavour was more distinctive. Oh durian lovers are so hard to please… but at these crazy prices,  fruit vendors have to choose their suppliers well and wisely.