It was a Wednesday evening and I was supposed to meet a friend who was visiting from HK for drinks at the Hilton. She canceled on me last minute and I ended up tagging along with SW for dinner and drinks with a friend visiting from Singapore. I asked SW where we should go for dinner and immediately he suggested that we eat in the hotel where the friend was staying, the new-ish GTower hotel on Jalan Tun Razak. It wasn’t a natural choice for me, the last time I went there to the Bridge Bar to have a look around, I was sorely disappointed. It was quiet with no view of KLCC and really weird security issues to get into public spaces. Anyway, we walked around and opted for a casual setting of  “The Social” eatery and bar over the posh italian restaurant Tanzini upstairs.

The Social dinner place was practically empty, a few office types were having a drink downstairs at the bar. I think the lunch set menu probably draws more of a crowd than dinner. My chicken rice and SW’s pizza looked great but it lacked the care and tenderness of a specialist. The salad was fresh but mildly lacking in quantity. Fortunately the service was prompt (well, there wasn’t anyone else to attend to) but the waitress told us we had to leave at 10pm as that section was closing. We would however, be welcome to order our desserts and tea/coffee at the bar downstairs.

Trundling down the stairs, we realized just how large the place was, downstairs there was a stage for a live band 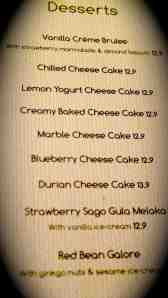 and a DJ, playing relatively decent top hits. We sat sort of “al fresco” (which isn’t really al fresco because we were still in the building), we were just sitting outside of the door of the bar. Upon presentation of the menu, I noticed that they had two pages of dessert, one page containing the more conventional choices – tiramisu (a house special), chocolate tart, bread and butter pudding (another house special) and the accompanying page listing a fairly impressive assortment of cheesecake.

I was tempted to have the durian cheesecake but confess that as it was my first time there, I went along with the waiter’s recommendation for a house special and chose the tiramisu. SW and friend went for opera cake and blueberry cheesecake respectively. Both of them were pretty happy with their cakes, but my tiramisu on second bite didn’t sit well with me ( it seemed the cream was past its due date) and when the nice waiter came back, I told him my opinion of their house special. He was apologetic and went and got the manager. I repeated my opinion and the manager suggested a change to the chocolate tart instead. This was a much better dessert and thoroughly enjoyable as it was warm, small and very rich dark chocolate.

But I should have asked for the Durian cheesecake instead. Ah well, next time…