We (as in my durian crazy colleagues and I) usually end up in Jalan Imbi or just outside Greenview for durians (if you’re wondering where these places are, fear not, I shall go into further detail in other entries). But last Friday, after what was a rather short but much anticipated board meeting (lots of energy spent in preparation), we decided that we really needed a break from the corporate scene at the office.

Durian is rather sinful, but given that we don’t have many other vices, we’ve allowed ourselves this particular treat.

First thing you should know is that KL traffic is not to be trifled with. We left the office at about 7.30pm to pick up my other half round the corner and got on the road heading towards PJ by 8pm. It was the Federal Highway usual killer congestion all the way to PJ Hilton and we finally got to Rothman’s roundabout at 9:30pm.

If you drive round the corner and up the hill, you end up at the traffic light which encourages all drivers to stop and look to the left towards the amazing models of wedding dresses on the left. On the right is  a row of shophouses by an overhead bridge where the original Ah Tuan Ee’s Nyona restaurant is (plug for you here, Ed!).

Take a right at that light and immediately take the first left, which takes you past the police station and round a bend. There are 2 durian stalls completely lit by white fluorescent lighting and zinc roofs overhead. The first one that you come to has lots of photos indicating the types of durians, and the second one shortly after on the right is Donald’s Durian – which is what we came to try.

My colleague AC had heard of Donald’s Durian through a friend of hers, and rumour has it- or truth as it may be- that the top MCA officials love coming here to eat and hold charity auctions of the durians for one foundation or another. Hence, Donald’s was known to be a popular spot. 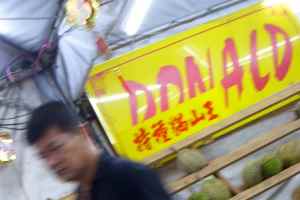 Donald already had some clients he was serving, a very nice couple who were sitting there clearly digesting their recently consumed protein-laden dessert.

For us though, this was dinner, and it had to be taken very seriously.

Donald’s welcoming presentation was excellent, expect him to charm you the first instance you step in, by proferring you some durian to try first. he laughingly says that once you try (which we did, of course) you then have to buy. The first one was indeed fantastic in flavour, it was the Mau Sang Wang, otherwise known by its English moniker: ELVIS.

We polished off the Elvis (which was from the state of Pahang) and swiftly requested for the next one. He offered us one from Penang which had a slight peachy hue but it was too dry for our liking. We subsequently had an XO durian, but that too we found a tad dry for our taste. It was back to the Elvis species but we found that we already had the best one at the start.

As four of us sat there contemplating our courses of durians, I wondered out loud why the first one was the best. My wise other half promptly said that it stood to reason, because if you have a crappy durian first, its highly unlikely that your tastebuds will activate the will to have another.

Donald thought that our comments were slightly frivolous and supplied his own wisdom. He said that we common folk liked the workhorse of the industry – the Elvis- and didn’t know how to appreciate the refinements that the Bentley (XO and Penang durians) had to offer.

Not entirely true, as I’ve had many Penang durians but the fruit has to be in season, or it just doesn’t taste ready for the table.

All in all, we had about 5 durians between the 4 of us, but we packed some of them which we felt were too dry and didn’t feel like consuming.

Overall, we were of unanimous opinion that the experience was good. Here are the reasons in summary.

Excellent lighting and reasonably spacious seating areas (6 tables), good car parking availability. Water is served from a distilled dispenser in clean plastic cups and tissue in the form of toilet rolls are supplied on each table. Proper sink with a durian sacrificed for the tap so that you can wash your hands and rid yourself of the “smell”.

Donald was jovial and friendly, albeit exuding a rather commercial attitude towards the clientele. But he was most attentive and wasted no time in procuring you another species on request. He had his wife helping him out to direct him on customer orders, which was great as he could be distracted with other clientele. Furthermore, Donald speaks really good English, which helps when you have a range of clientele. (A Japanese group turned up, whereupon the the girls screwed up their noses at the durian scent but Donald still convinced them to take a seat and try one)

Reasonable we thought, we spent a total of RM 180 for the 5 and were satisfied with the overall feel and service offered.

All sorts, we encountered a well spoken chinese couple, a family of 7 who came in an MPV with their small kids and a baby, a single lady who was dressed as though she was from another decade, a young couple, a muslim cleric with his friend who came by taxi to purchase durians for takeaway and the Japanese group.

AC and I decided that we might try the stall next door the next time around, but Donald’s proved a satisfying place for a durian meal. (TW gave up on the penultimate one, better practice if you want to keep up next time!)

The NST carried an article today about the preferences of durians by age. The article stated that the younger generation (<50 yrs old)  are no longer keen on durians, based on a survey conducted by the Federal Agriculture Marketing Authority (FAMA). As a result of this, the FAMA Director General Datuk Mohamed Shariff Abdul Aziz said that they will be conducting campaigns to promote the spiky fruit.

He did note that the enthusiasm for durian among the 50+ age group remain unchanged.

Its going to be interesting to see how FAMA intends to promote durians to the younger crowd, perhaps there is another fruit (jackfruit, mangosteen) that provides a model to follow? 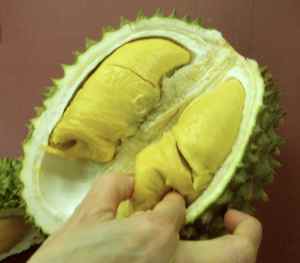 Pinch it… Poke it… Give it a sniff…

I wonder whether anyone has the same cravings as I do. Durians are notoriously addictive, but it all starts with the first experience and whether you have the right nose and tastebuds to handle the overwhelming flavors that overrun the senses.

My colleague and I had a craving the other day and I was searching the web to find out an alternative durian stall to try in KL. But my search was very tedious and many sites and food blogs were often too brief or just provided local directions.

This blog is dedicated to all the durian fans out there and enhance the appreciation for these unique fruits of South East Asia.